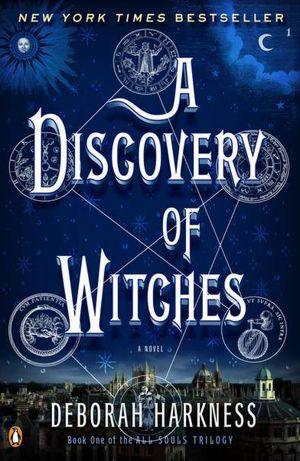 A Discovery of Witches: A Novel

Amazon Best of the Month, February 2011: It all begins with a lost manuscript, a reluctant witch, and 1,500-year-old vampire. Dr. Diana Bishop has a really good reason for refusing to do magic: she is a direct descendant of the first woman executed in the Salem Witch Trials, and her parents cautioned her be discreet about her talents before they were murdered, presumably for having "too much power." So it is purely by accident that Diana unlocks an enchanted long-lost manuscript (a book that all manner of supernatural creatures believe to hold the story of all origins and the secret of immortality) at the Bodleian Library at Oxford, and finds herself in a race to prevent an interspecies war. A sparkling debut written by a historian and self-proclaimed oenophile, A Discovery of Witches is heady mix of history and magic, mythology and love (cue the aforementioned vampire!), making for a luxurious, intoxicating, one-sitting read. --Daphne Durham

Ten More Books for Readers of *A Discovery of Witches*

I may have written a novel, but I’m still a history professor! Here are some reading suggestions for those of you whose curiosity has been stirred up by the story of Diana Bishop, Matthew Clairmont, and the hunt for the missing alchemical manuscript Ashmole 782. All of the titles here are non-fiction, and inspired some aspect of A Discovery of Witches.

Elias Ashmole, Theatrum Chemicum Brittanicum: Don’t be put off by the Latin title. This is a collection of English alchemical texts that were gathered by Elias Ashmole. The missing alchemical manuscript that Diana finds in the Bodleian library is not among them, alas, but if you are interested in the subject this is a fascinating glimpse into the mysterious texts that she studies as a historian.

Janet Browne, Darwin’s Origin of Species: Books That Changed the World: Browne is not only a great scholar, but a superb writer. A highly-regarded biographer of Darwin, here she turns her talents to writing a “biography” of his most famous book—and one of Matthew Clairmont’s favorites, as well.

Owen Davies, Grimoires: A History of Magic Books. If you are interested in the history of magic and witchcraft, Davies’ description of the development of magical spellbooks will provide insights into how ideas about magic, science, and nature developed over the centuries.

Carol Karlsen, The Devil in the Shape of a Woman: Witchcraft in Colonial New England. Diana Bishop is descended from a long line of witches. You will find out more about some of those witches—the Bishops and the Proctors—while reading this classic interpretation of what happened in Salem in 1692.

Robert Kehew, Ezra Pound, and W. D. Snodgrass, Lark in the Morning: The Verses of the Troubadours. Matthew is a very old vampire, who has slightly old-fashioned views on love and romance. You might be surprised at the love poetry of his early life, and come away with a whole new appreciation for “old-fashioned.”

Bruce Moran’s Distilling Knowledge: Alchemy, Chemistry, and the Scientific Revolution. This marvelous book is not only deeply learned but extremely readable. Touched with Moran’s sense of humor and his compassion for his subject’s tireless efforts to understand the natural world, you will come away from this book with a new appreciation for the alchemists.

Alexander Roob, Alchemy and Mysticism. Diana Bishop is an expert on the enigmatic imagery that is used in alchemical texts. Many are included in Roob’s book, along with other illustrations from mystical and magical traditions.

Lyndal Roper, Witch Craze: Terror and Fantasy in Baroque Germany. This scholarly book was important to me as I wrote A Discovery of Witches because it helped me understand how the belief in witches influenced the imagination. Many of the notions we have about witchcraft today have their roots in these terrifying fantasies.

James Sharpe, Instruments of Darkness: Witchcraft in Early Modern England. Sharpe’s book is an ideal starting point if you are interested in the history of witchcraft beyond Salem or Germany. One of his most controversial arguments focuses on the role that women played as accusers—not just as victims—in the witchcraft trials.

Bryan Sykes, The Seven Daughters of Eve: The Science That Reveals Our Genetic Ancestry. I was fascinated by the combination of history, genealogy, and science in Sykes’s work. The book provides an introduction to the study of genetics, and to the legacies that are carried from generation to generation among the population.

In Harkness's lively debut, witches, vampires, and demons outnumber humans at Oxford's Bodleian Library, where witch and Yale historian Diana Bishop discovers an enchanted manuscript, attracting the attention of 1,500-year-old vampire Matthew Clairmont. The orphaned daughter of two powerful witches, Bishop prefers intellect, but relies on magic when her discovery of a palimpsest documenting the origin of supernatural species releases an assortment of undead who threaten, stalk, and harass her. Against all occult social propriety, Bishop turns for protection to tall, dark, bloodsucking man-about-town Clairmont. Their research raises questions of evolution and extinction among the living dead, and their romance awakens centuries-old enmities. Harkness imagines a crowded universe where normal and paranormal creatures observe a tenuous peace. "Magic is desire made real," Bishop says after both her desire and magical prowess exceed her expectations. Harkness brings this world to vibrant life and makes the most of the growing popularity of gothic adventure with an ending that keeps the Old Lodge door wide open. (Feb.)
(c) Copyright PWxyz, LLC. All rights reserved.