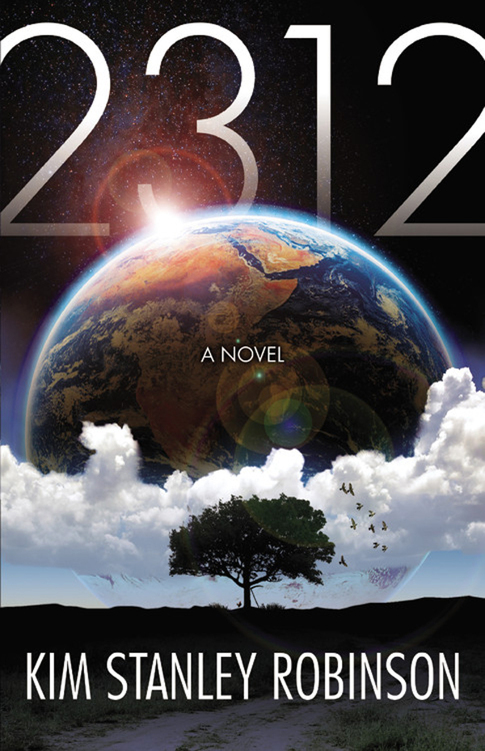 The year is 2312. Scientific and technological advances have opened gateways to an extraordinary future. Earth is no longer humanity's only home; new habitats have been created throughout the solar system on moons, planets, and in between. But in this year, 2312, a sequence of events will force humanity to confront its past, its present, and its future.

The first event takes place on Mercury, on the city of Terminator, itself a miracle of engineering on an unprecedented scale. It is an unexpected death, but one that might have been foreseen. For Swan Er Hong, it is an event that will change her life. Swan was once a woman who designed worlds. Now she will be led into a plot to destroy them.

Praise for the Novels of Kim Stanley Robinson*:

*"Intellectually engaged and intensely humane in a way SF rarely is, exuberantly speculative in a way only the best SF can be, this is the work of a writer at or approaching the top of his game." - Iain M. Banks

"If I had to choose one writer whose work will set the standard for science fiction in the future, it would be Kim Stanley Robinson." --- *The New York Times

"For power, scope, depth, and detail, no other Martian epic comes close." --- Kirkus on Red Mars*

"Robinson's...scientific homework [is] impeccable, and his handling of a large cast is a model to many avowed saga mongers." --- Booklist on *Red Mars

"The author succeeds...in his fascinating speculation about our ecological future, and the steps we could be taking to repair the world for future generations. " --- Kirkus on Fifty Degrees Below*

"[Robinson] has created a novel of ideas of the best sort, filled to overflowing with philosophy, theology and scientific theory." --- Publishers Weekly on The Years of Rice and Salt

"Intellectually engaged and intensely humane in a way SF rarely is, exuberantly speculative in a way only the best SF can be, this is the work of a writer at or approaching the top of his game." (Iain M. Banks )

"2312 is a monumental tour-de-force that re-imagines the solar system in ways no one has envisioned before. Whether comparing the compositions of Beethoven to those of skylarks and warblers, or describing a life-threatening sunrise on Mercury, Robinson fills 2312 with joy and exuberance, danger and fear, and the steadily mounting suspense of a mystery that spans the planets. This is the finest novel yet from the author who gave us the Mars Trilogy and GALILEO'S DREAM. An amazing accomplishment." (Robert Crais )

"Inherently epic stuff... expect interplanetary strife, conspiracies, more big ideas than most SF authors pack into a trilogy... [yet] this is ultimately in so many respects a book about Earth... a wise and wondrous novel" (SFX )