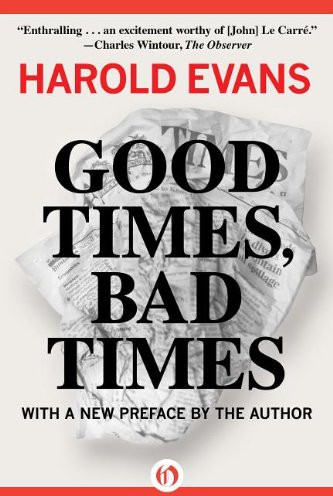 In Harold Evans’s classic memoir, he tells the inside story of Rupert Murdoch’s takeover of the Times of London and his rise to become a global media power

In 1981, Harold Evans was the editor of one of Britain’s most prestigious publications, the Sunday Times, which had thrived under his watch. When Australian publishing baron Rupert Murdoch bought the daily Times of London, he persuaded Evans to become its editor with guarantees of editorial independence. But after a year of broken promises and conflict over the paper’s direction, Evans departed amid an international media firestorm.

Evans’s story is a gripping, behind-the-scenes look at Murdoch’s ascension to global media magnate. It is Murdoch laid bare, an intimate account of a man using the power of his media empire for his own ends. Riveting, provocative, and insightful, Good Times, Bad Times is as relevant today as when it was first written.

This book features a new preface by the author, in which he discusses the Rupert Murdoch phone-hacking scandal.

“Evans remains one of the great figures of modern journalism.” —The Economist*

“Entertaining and important. . . . The book has caused a stir.” —The New York Times

“Extraordinarily well written. A vivid portrait of what it is like to be the editor of a great daily newspaper.”—Chicago Tribune

“If there is one living editor who has carried the fight against the forces of darkness with [the] most vigour, persistence and brilliance, that man is unquestionably Harold Evans.” —The Independent

“Brilliantly written, sustaining a sweeping power of narrative and packed with pungently witty character sketches that will remind Hazlitt. . . . Compulsory reading for all who wish to estimate the strength of foundations of British democracy.” —The Times Literary Supplement

“Much has been written about Rupert Murdoch by journalists peering in from the outside . . . Good Times, Bad Times is by a journalist who was engaged with Murdoch in a struggle to the death.” —The New Republic

“Fascinating . . . both an uncommonly entertaining tale and an important account of the tribulations of the press in an age of international media barons.” —Arthur Schlesinger, Jr.

“It’s a compelling book, a wonderful ‘read’. It is often very funny. It is also about journalism and good stories and editing. . . . One can think of a long list of prime ministers who have done less for publishing liberties in this country than Harold Evans did.” —London Review of Books

Sir Harold Evans (b. 1928) is a celebrated British journalist and author who has served as editor of the Sunday Times and the Times of London, president and publisher of Random House, and editorial director of U.S. News & World Report. He is currently editor at large of the Reuters news agency. As editor of the Sunday Times for fourteen years, Evans emphasized a style of tough investigative journalism responsible for breaking many of the day’s major news stories. His acclaimed books include Good Times, Bad Times, My Paper Chase, and the New York Times bestseller The American Century. Evans lives in New York City with his wife, Tina Brown.