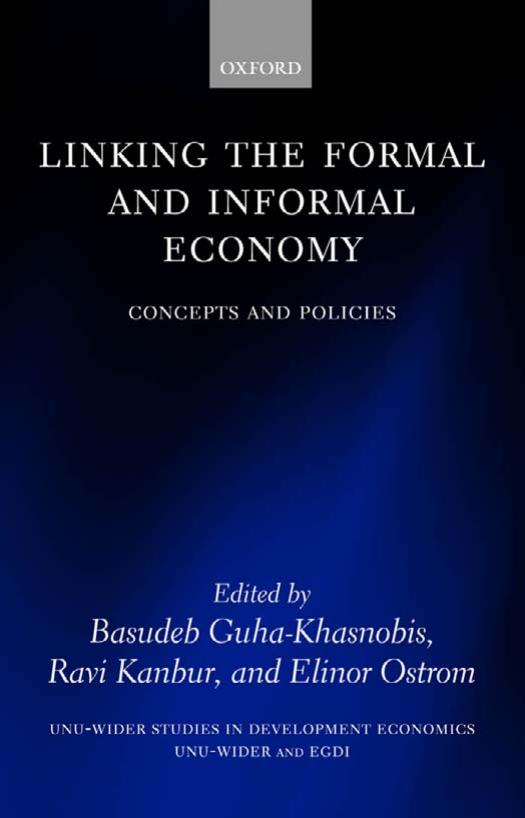 more nolume brings together a significant new collection of studies on formality and informality in developing countries. Containing contributions from some of the very best analysts in development studies, the volume is multidisciplinary in nature, with contributions from anthropologists, economists, sociologists, and political scientists.

"No matter how you divide up the developing world-'formal-informal', 'legal-extralegal' (my preference)- one thing is not debatable: most people are poor, on the outside of the system looking in, and getting angrier every day. The message of this book is it's time to stop talking and start designing reforms based on the informal practices and organizations that poor entrepreneurs already use. I second that motion. If you rebuild the system from the bottom-up, they will come, with their enterprise, creativity, and piles of potential capital."--Hernando de Soto, President, Institute for Liberty and Democracy, Peru

UNEDITED UK REVIEW: "The obvious is not necessarily the best. For many, a well-defined set of formal institutions is the obvious road to economic success. Academic analysts are attracted by the parsimony of formal institutions. Policy makers appreciate the apparent predictability of the effect on addressees. Constitutional lawyers prefer formal institutions since they lend themselves to ex post control. Yet as the book convincingly demonstrates, in many contexts, and in developing countries in particular, going for the obvious is bad policy. Imposing a small set of formal institutions forces all economic activity into a Procrustes' bed. Often, a clever mixture of formal and informal elements has two main advantages: harnessing new resources for corporate governance, and making the firm more responsive to its environment, be it demand, competition or regulatory expectations."--Christoph Engel, Max Planck Institute for Research on Collective Goods, Bonn

UNEDITED UK REVIEW: "Linking the Formal and Informal Economy is an excellent synthesis of past debates and contemporary policy analysis. It embraces economic development, governance and social justice issues and it provides innovative case studies from a wide variety of contexts."--Ray Bromley, State University of New York at Albany

Basudeb Guha-Khasnobis is, since 2002, a research fellow and project director at UNU-WIDER. Previous appointments include IGIDR (Mumbai), the EXIM Bank of India (Bangalore) ICRIER (New Delhi), and as a research consultant for several international organizations.
Ravi Kanbur is T.H. Lee Professor of World Affairs, International Professor of Applied Economics and Management, and Professor of Economics at Cornell University, and previously Professor of Economics at the University of Warwick, and Chief Economist for Africa at the World Bank.
Elinor Ostrom is Arthur F. Bentley Professor of Political Science at Indiana University. She is also Co-Director, Workshop in Political Theory and Policy Analysis and Co-Director, Center for the Study of Institutions, Population and Environmental Change (CIPEC) at Indiana University. She is a member of the Expert Group on Development Issues of the Swedish Ministry for Foreign Affairs.