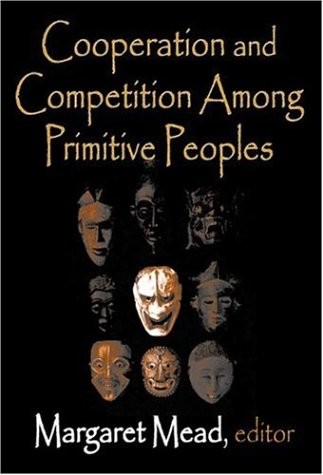 Cooperation and Competition Among Primitive Peoples

When, in 1935, Margaret Mead was asked by a member of the interdisciplinary committee of the Social Science Research Council to prepare a survey of several cultures for publication, she ended up creating a model for future ethnological survey texts, as well as furthering the understanding of cultural relativism in anthropological studies. The result of her work, Cooperation and Competition Among Primitive Peoples, is fascinating. The essays do not purport to be source materials on the peoples being studied, but rather have been assembled as interpretative statements, meant to provide a background for planning future research in this field in our own society.

In many respects, this volume is a pioneer effort in anthropological literature. It remains firmly part of the genre of cooperative research, or "interdisciplinary research," though at the time of its original publication that phrase had yet to be coined. Additionally, this work is more theoretical in nature than a faithful anthropological record, as all the essays were written in New York City, on a low budget, and without fieldwork. The significance of these studies lies in the fact that Cooperation and Competition Among Primitive Peoples was the first attempt to think about the very complex problems of cultural character and social structure, coupled with a meticulous execution of comparative study. This work will be of great interest to anthropologists, cultural theorists, and students of interdisciplinary research.

The distinguished contributors include: Margaret Mead, the editor of this volume, who authored "The Arapesh of New Guinea," "The Manus of the Admiralty Islands," and "The Samoans"; Jeannette Mirsky, who contributed "The Eskimo of Greenland" and "The Dakota"; Ruth Landes, who wrote "The Ojibwa of Canada"; May Mandelbaum Edel, author of "The Bachiga of East Africa"; Irving Goldman, who contributed "The Ifugao of the Philippine Islands," "The Kwakiutl of Vancouver Island," "The Zuni of New Mexico," and "The Bathonga of South Africa"; Buell Quain, who penned "The Iriquois"; and Bernard Mishkin, author of "The Maori of New Zealand."

Margaret Mead (1901-1978) was associated with the American Museum of Natural History in New York for over fifty years, becoming Curator of Ethnology in 1964. She taught at Columbia University and the New School for Social Research as well as a number of other universities, and served as president of the American Association for the Advancement of Science and the American Anthropological Association. Among her many books is Continuities in Cultural Evolution, available from Transaction Publishers.

Margaret Mead (1901-1978) was associated with the American Museum of Natural History in New York for over fifty years, becoming curator of ethnology in 1964. She taught at Columbia University and the New School for Social Research as well as many other universities throughout her lifetime. Some of her books include Culture and Commitment, Continuities in Cultural Evolution, andThe Mountain Arapesh.