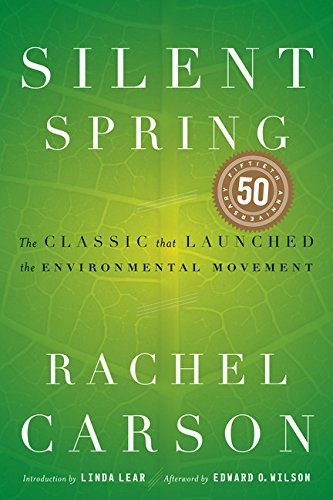 Rachel Carson’s Silent Spring was first published in three serialized excerpts in the New Yorker in June of 1962. The book appeared in September of that year and the outcry that followed its publication forced the banning of DDT and spurred revolutionary changes in the laws affecting our air, land, and water. Carson’s passionate concern for the future of our planet reverberated powerfully throughout the world, and her eloquent book was instrumental in launching the environmental movement. It is without question one of the landmark books of the twentieth century.

Rachel Carson's Silent Spring is now 35 years old. Written over the years 1958 to 1962, it took a hard look at the effects of insecticides and pesticides on songbird populations throughout the United States, whose declining numbers yielded the silence to which her title attests. "What happens in nature is not allowed to happen in the modern, chemical-drenched world," she writes, "where spraying destroys not only the insects but also their principal enemy, the birds. When later there is a resurgence of the insect population, as almost always happens, the birds are not there to keep their numbers in check." The publication of her impeccably reported text helped change that trend by setting off a wave of environmental legislation and galvanizing the nascent ecological movement. It is justly considered a classic, and it is well worth rereading today.