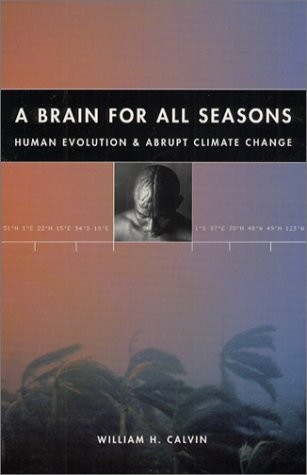 A Brain for All Seasons: Human Evolution and Abrupt Climate Change

One of the most shocking realizations of all time has slowly been dawning on us: the earth's climate does great flip-flops every few thousand years, and with breathtaking speed. In just a few years, the climate suddenly cools worldwide. With only half the rainfall, severe dust storms whirl across vast areas. Lightning strikes ignite giant forest fires. For most mammals, including our ancestors, populations crash.

Our ancestors lived through hundreds of such abrupt episodes since the more gradual Ice Ages began two and a half million years ago—but abrupt cooling produced a population bottleneck each time, one that eliminated most of their relatives. We are the improbable descendants of those who survived—and later thrived.

William H. Calvin's marvelous A Brain for All Seasons argues that such cycles of cool, crash, and burn powered the pump for the enormous increase in brain size and complexity in human beings. Driven by the imperative to adapt within a generation to "whiplash" climate changes where only grass did well for a while, our ancestors learned to cooperate and innovate in hunting large grazing animals.

Calvin's book is structured as a travelogue that takes us around the globe and back in time. Beginning at Darwin's home in England, Calvin sits under an oak tree and muses on what controls the speed of evolutionary "progress." The Kalahari desert and the Sterkfontein caves in South Africa serve as the backdrop for a discussion of our ancestors' changing diets. A drought-shrunken lake in Kenya shows how grassy mudflats become great magnets for grazing animals. And in Copenhagen, we learn what ice cores have told us about abrupt jumps in past climates.

Perhaps the most dramatic discovery of all, though, awaits us as we fly with Calvin over the Gulf Stream and Greenland: global warming caused by human-made pollution could paradoxically trigger another sudden episode of global cooling. Because of the accumulation of greenhouse gases in the atmosphere, the oceanic "conveyor belt" that sends warmer waters into the North Atlantic could abruptly shut down. If that happens again, much of the Earth could be plunged into a deep chill within a few years. Europe would become as cold and dry as Siberia. Agriculture could not adapt quickly enough to avoid worldwide famines and wars over the dwindling food supplies—a crash from which it would take us many centuries to recover.

With this warning, Calvin connects us directly to evolution and the surprises it holds. Highly illustrated, conversational, and learned, A Brain for All Seasons is a fascinating view of where we came from, and where we're going.

Imagine going to the first meeting of a course you'd long waited to enroll in. You sit down at your computer, open an e-mail message from your professor, in this case the author William H. Calvin, and get your first lesson. Your professor is thousands of miles away. In fact, he's at 51.4oN, 0.1oE. Where? Why, Charles Darwin's home in Kent, England, of course, the famous Down House. So begins Calvin's journey through evolution, particularly human evolution, as he leads his "class" from the home of the man many would call the father of evolution to various locales that provide fodder for his ultimate message: human evolution, like that of other organisms, is not a gradual transformation of form and behavior over time. Rather, like the shifts in the environments in which organisms find themselves, evolutionary change is abrupt, even catastrophic. A neurobiologist by training (he is at the University of Washington School of Medicine), Calvin leads us along a trail that links sudden worldwide coolings to the origin of our large brains and modern human behavior. By modern behavior, he is thinking not just of sophisticated toolmaking; he includes such social behavior as pair bonding and, ultimately, language, a sense of the aesthetic, and "abstract thinking, planning depth, innovation, and symbolic behavior." The sudden coolings, Calvin tells us, reduced rainfall, induced dust storms and fires, and produced bottlenecks in the populations of our forebears. The few survivors had to adapt within one generation to, for example, a climate in which only grass grew well, spurring them to develop innovative techniques for hunting the large grazing animals that converted the grass into edible energy. Thus, he concludes, the cycles of "cool, crash, and burn" drove increased brain size and complexity. I think it unlikely that the climatic shifts were behind changes in the physical size and complexity of the brain, but these sudden jolts could certainly have spurred early humans to exploit the existing potential of the brain. To make his points, Calvin takes us, his class, on a peripatetic journey as he visits museums, attends conferences, pays homage to a variety of African human fossil sites, and flies over huge African expanses and the vast Nordic seas. As one might expect, this approach is not always successful, but if you forget the formatting at the beginning of each brief chapter (a nod toward an e-mail message, but one without typos, code abbreviations and non sequiturs), the read flows a bit better. Calvin's premise--that human evolution is correlated with climatic swings--is, of course, not new. Indeed, the traditional Darwinian view holds that evolution proceeds through organisms tracking their environments. And well over a decade ago paleontologist Elisabeth Vrba proposed that changes in species representation over time, as evidenced especially in the South African fossil record of antelopes and early hominids (such as Australopithecus and Paranthropus), were rapid and correlated with shifts between wetter and drier conditions. But Calvin's presentation differs from the others in that it really is an attempt to think globally about past and present climatic change and its possible effects on creatures and their evolution. As one of the authors whose work on human evolution he cites as recommended reading, I found his discussion of the fossils less engaging than the climate-related information. The book definitely picks up steam when he moves away from trying to discuss human fossils and digs into issues of global warming, shrinking polar ice caps, and oceanic currents. (This may be because much of this section had already been published as "The Great Climate Flip-Flop" in the Atlantic Monthly.) Here he seems to have more fun, getting across an image, for example, of subsurface oceanic water behavior by describing what happens when you pour very cold heavy cream over a spoon into a cup of hot coffee (it sinks as a column) and explaining North Atlantic Ocean current movements by way of a story about incorrectly hooking up a hot-water tank with a toilet that then acted as a radiator. Heading back home to Seattle on the long, great-circle-route flight from Nairobi, over the Gulf Stream and Greenland, Calvin muses on the present global warming brought about by human activities. It could, he says, paradoxically trigger another episode of sudden cooling. The accumulation of greenhouse gases in the atmosphere could induce an abrupt shutting down of the oceanic "conveyor belt" that sends warmer waters into the North Atlantic, plunging much of the earth into a deep chill. But he doubts that another boom-then-bust cycle will jack up our brain power. We're now smart, he concludes, "in ways that owe little to our present brain power, but rather to the accumulated experience of the people that have lived since the last ice age ended. Education. Writing. Technology. Science." And he suggests that if we're really smart, our accumulated experience may just help us find a way to avoid this looming threat.

Jeffrey H. Schwartz teaches physical anthropology at the University of Pittsburgh and is author of Sudden Origins: Fossils, Genes and the Origin of Species (Wiley, 1999).

"William Calvin uses an adventure across today's Earth to draw laser-sharp insights about our human past, and possibly its future. In A Brain for All Seasons, Calvin shows how gyrating weather patterns may have forged our ancestors' evolutionary path. And since Earth's climate may resume those catastrophic swings at any time, evolution may not be finished with us yet." - David Brin, author of The Transparent Society