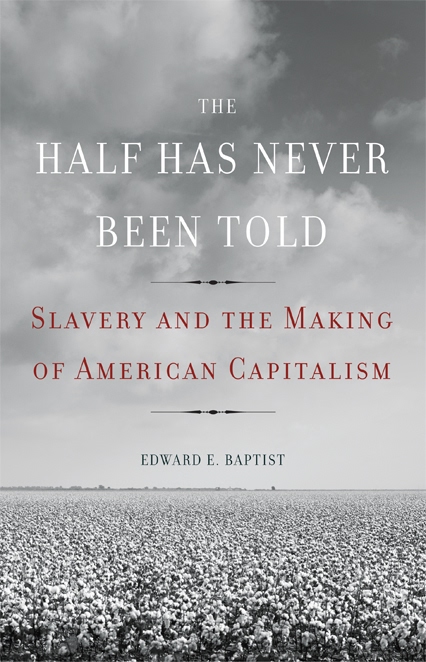 The Half Has Never Been Told: Slavery and the Making of American Capitalism

Americans tend to assume that modern historiography has produced a full and complete understanding of slavery in the United States, as a shameful pre-modern institution, existing in isolation from America’s later success. But while we have long since rejected the idealistic depiction of happy slaves and paternalistic masters, we have not yet begun to grapple with the full extent of slavery’s horrors—or its link to the expansion of the country, the political battles that caused the Civil War, or the growth of our modern capitalist economy..As historian Edward Baptist reveals in The Half Has Never Been Told, slavery and its expansion were central to the evolution and modernization of our nation in the 18th and 19th centuries, catapulting the US into a modern, industrial and capitalist economy. In the span of a single lifetime, the South grew from a narrow coastal strip of worn-out tobacco plantations to a sub-continental cotton empire. By 1861 it had five times as many slaves as it had during the Revolution, and was producing two billion pounds of cotton a year. It was through slavery and slavery alone that the United States achieved a virtual monopoly on the production of cotton, the key raw material of the Industrial Revolution, and was transformed into a global power rivaled only by England. The Half Has Never Been Told begins in 1787, when Northern emancipation and falling profits from Southern tobacco threatened the future of American slavery. Seeking desperately to prevent this collapse, innovative Southern enslavers brought slavery out of the Southeast’s decaying coastal plantation belts, leading trains of men, women, and children to the frontier states where the labor-intensive cotton crop beckoned. By 1860, their empire of cotton and labor camps stretched all the way to Texas. During America’s formative years, Baptist explains, our chief form of innovation was slavery, and ways to make slavery increasingly profitable. Through forced migration, quotas, and torture, slave owners extracted continual increases in efficiency from their slaves making competition with American cotton fields near impossible. Financial innovations and banks, meanwhile, helped feed credit to the cotton plantations, spurring on economic expansion and confirming for enslavers and their political leaders that their livelihood, and the American economy, depended on cotton.Despite the mayhem wreaked upon them, enslaved African-Americans survived, clinging desperately to the ability to name the evil they confronted. By the time of Abraham Lincoln’s election, the stories they smuggled out of the whipping-machine had helped to put the North and South on the collision course that led to the Civil War, national emancipation, and the collapse of the Southern slave industry—a system that, Baptist suggests, might otherwise have gone on indefinitely. Using thousands of interviews with former slaves, hundreds of plantation records, newspapers, and the personal papers of dozens of politicians, entrepreneurs, and escaped slaves, The Half Has Never Been Told unveils, at last, the most savage secrets at the heart of American history. These intimate stories of survival and tragedy transform our understanding of the rise of the American nation, the outbreak of the Civil War, and the birth of entrepreneurial capitalism. A much-needed challenge to the reigning narratives of slavery, The Half Has Never Been Told reveals the alarming extent to which our country’s success was irrevocably tied to the institution of slavery.