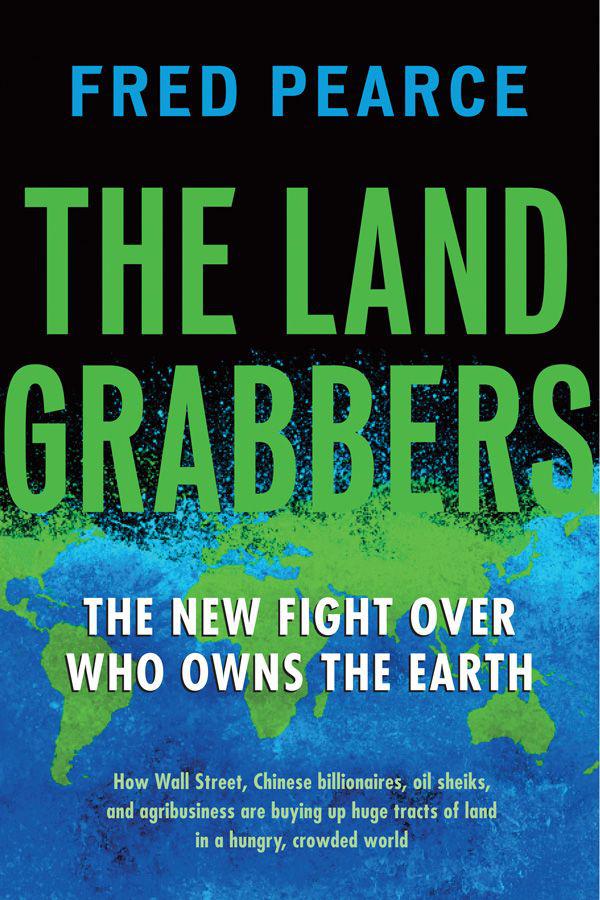 The Land Grabbers: The New Fight Over Who Owns the Earth

How Wall Street, Chinese billionaires, oil sheiks, and agribusiness are buying up huge tracts of land in a hungry, crowded world.

An unprecedented land grab is taking place around the world. Fearing future food shortages or eager to profit from them, the world’s wealthiest and most acquisitive countries, corporations, and individuals have been buying and leasing vast tracts of land around the world. The scale is astounding: parcels the size of small countries are being gobbled up across the plains of Africa, the paddy fields of Southeast Asia, the jungles of South America, and the prairies of Eastern Europe. Veteran science writer Fred Pearce spent a year circling the globe to find out who was doing the buying, whose land was being taken over, and what the effect of these massive land deals seems to be.

The Land Grabbers is a first-of-its-kind exposé that reveals the scale and the human costs of the land grab, one of the most profound ethical, environmental, and economic issues facing the globalized world in the twenty-first century. The corporations, speculators, and governments scooping up land cheap in the developing world claim that industrial-scale farming will help local economies. But Pearce’s research reveals a far more troubling reality. While some mega-farms are ethically run, all too often poor farmers and cattle herders are evicted from ancestral lands or cut off from water sources. The good jobs promised by foreign capitalists and home governments alike fail to materialize. Hungry nations are being forced to export their food to the wealthy, and corporate potentates run fiefdoms oblivious to the country beyond their fences.

Pearce’s story is populated with larger-than-life characters, from financier George Soros and industry tycoon Richard Branson, to Gulf state sheikhs, Russian oligarchs, British barons, and Burmese generals. We discover why Goldman Sachs is buying up the Chinese poultry industry, what Lord Rothschild and a legendary 1970s asset-stripper are doing in the backwoods of Brazil, and what plans a Saudi oil billionaire has for Ethiopia. Along the way, Pearce introduces us to the people who actually live on, and live off of, the supposedly “empty” land that is being grabbed, from Cambodian peasants, victimized first by the Khmer Rouge and now by crony capitalism, to African pastoralists confined to ever-smaller tracts.

Over the next few decades, land grabbing may matter more, to more of the planet’s people, than even climate change. It will affect who eats and who does not, who gets richer and who gets poorer, and whether agrarian societies can exist outside corporate control. It is the new battle over who owns the planet.

"Pearce may be the only person to visit all the critical frontlines worldwide, and his brilliant reporting makes the abstraction real. Probably the most important environmental book anyone could read right now.”—Timothy Searchinger, fellow, German Marshall Fund; research scholar, Princeton University

“A thorough and enlightening exposé.”—Conservation

“A well-researched, informative and accessible look at important economic and agricultural issues.”—Kirkus Reviews

“This is just what the world has been waiting for—a detailed overview of the land grabs that are the principal manifestation of a new geopolitics of food.”—Lester R. Brown, President of Earth Policy Institute and author of World on the Edge

“The remarkable Fred Pearce has done it again: in The Land Grabbers he opens up vastly important new terrain few of us have even noticed. When the rich and powerful start buying up the planet's fundamental resources—land and water—from the poor and vulnerable, we'd all better notice.”—James Gustave Speth, author of The Bridge at the Edge of the World: Capitalism, the Environment, and Crossing from Crisis to Sustainability

“Wherever on this earth poor villagers, agribusiness magnates, ignorant or corrupt governments, petrodollars, commodity traders and hungry multitudes come together, Fred Pearce is at the nexus, brilliantly reporting on the biggest swindle of the 21st century. With the modern landgrab, the enclosure movement has attained planetary proportions and Pearce is without peer in describing the dire consequences of this ongoing human and environmental disaster.”—Susan George, author, Hijacking America, board president, the Transnational Institute

"In The Land Grabbers, Pearce has produced a powerful piece of journalism that illuminates how the drive for expanded food production is transfomring the planet. anyone who cares where her next meal is coming from should read it."–Washington Post

Fred Pearce is an award-winning author and journalist based in London. He has reported on environment, science, and development issues from sixty-seven countries over the past twenty years. Environment consultant at New Scientist since 1992, he also writes regularly for the Guardian newspaper and Yale University’s prestigious e360 website. Pearce was voted UK Environment Journalist of the Year in 2001 and CGIAR agricultural research journalist of the year in 2002, and won a lifetime achievement award from the Association of British Science Writers in 2011. His many books include With Speed and Violence, Confessions of an Eco-Sinner, The Coming Population Crash, and When the Rivers Run Dry.