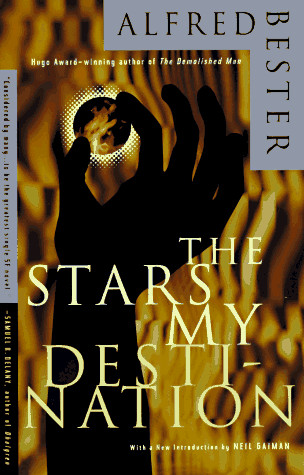 When it comes to pop culture, Alfred Bester (1913-1987) is something of an unsung hero. He wrote radio scripts, screenplays, and comic books (in which capacity he created the original Green Lantern Oath). But Bester is best known for his science-fiction novels, and The Stars My Destination may be his finest creation. First published in 1956 (as Tiger! Tiger!), the novel revolves around a hero named Gulliver Foyle, who teleports himself out of a tight spot and creates a great deal of consternation in the process. With its sly potshotting at corporate skullduggery, The Stars My Destination seems utterly contemporary, and has maintained its status as an underground classic for forty years. (Bester fans should also note that Vintage has reprinted The Demolished Man, which won the very first Hugo Award in 1953.)

The Stars My Destination is a science fiction novel by Alfred Bester. Originally serialized in Galaxy magazine in four parts beginning with the October 1956 issue, it first appeared in book form in the United Kingdom as Tiger! Tiger! – after William Blake's poem "The Tyger", the first verse of which is printed as the first page of the novel – and the book remains widely known under that title in markets where this edition was circulated. A working title for the novel was Hell's My Destination, and it was also associated with the name The Burning Spear. Read more - Shopping-Enabled Wikipedia on Amazon