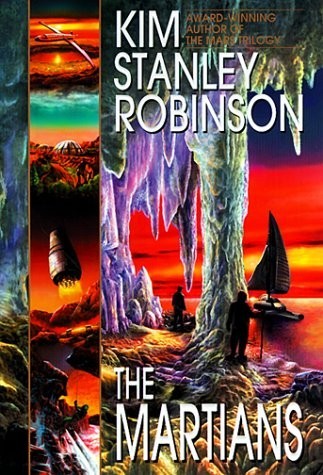 Kim Stanley Robinson's Mars trilogy is one of science fiction's most honored series, with Red Mars winning the distinguished Nebula Award, and both Green Mars and Blue Mars honored with the Hugo. A modern-day classic of the genre, this epic saga deftly portrays the human stories behind Earth's most ambitious project yet: the terraforming of Mars.

Now, following the publication of his acclaimed adventure novel, Antarctica, Robinson returns to the realm he has made his own, in a work that brilliantly weaves together a futuristic setting with a poetic vision of the human spirit engaged in a drama as ancient as mankind itself.

From a training mission in Antarctica to blistering sandstorms sweeping through labyrinths of barren canyons, the interwoven stories of The Martians set in motion a sprawling cast of characters upon the surface of Mars. As the planet is transformed from an unexplored and forbidding terrain to a troubled image of a re-created Earth, we meet men and women who are bound together by their experiences on Mars and with each other.

Among them are Michel, a French psychologist dazzled by the beauty around him; Maya, a woman whose ill-fated love affairs lead to her first voyage to Mars; and Roger, a tall Martian-born guide who lacks social skills but has the courage to survive on the planet's dangerous yet strangely compelling surface.

Beginning with the First Hundred explorers, generations of friends, enemies, and lovers are swept up in the drama that is Earth's tenuous toehold on Mars. International exploration turns into world building; world building degenerates into political conflict, revolution, and war.

Following the strands of these lives and events, in an age when human life has been extended for decades, The Martians becomes the story of generations lived on the edge of the ultimate frontier, in a landscape of constant man-made and natural transformation.

This new masterpiece by Kim Stanley Robinson is a story of hope and disappointment, of fierce physical and psychological struggles. Both deeply human and scientifically cutting edge, The Martians is the epic chronicle of a planet that represents one of humanity's most glorious possibilities.

A Letter from Kim Stanley Robinson:

"When I finished Blue Mars, I realized I wasn't done with Mars yet.  There were things I still wanted to say about the place, and about my characters from the trilogy, and there were a number of sidebar stories and characters that had found no place in the trilogy's structure.  I also had a couple of precursor Mars stories that did not fit the trilogy's history--'Exploring Fossil Canyon' and 'Green Mars'--and I had held these out of my earlier story collections thinking they belonged with the Mars group."

So all this material was there, and as I wrote Antarctica, I found myself drawn back into the matter of Mars repeatedly, by the discovery of possible life in meteorite AHL8004 and by the Pathfinder landing.  I decided to make a collection of Martian tales, and as I put them in roughly chronological order, I saw that they seemed to be adding up to their own larger story, functioning as the trilogy's 'unconscious' or 'secret history'.  Using all kinds of modes, from folk tales to scientific articles, from personal accounts to the full text of a constitution, I arranged things so that the book altogether tells the story of an underground and hard-to-see resistance to the terraforming described in the trilogy proper.  I had a great time doing these stories, and hope they add up to my own version of a Martian Chronicles."

From the Paperback edition.

The Martians is a collection of stories, alternate histories, poems, and even the complete text of a planetary constitution based on Kim Stanley Robinson's award-winning Mars trilogy (composed of Red Mars, Green Mars, and Blue Mars). For those unfamiliar with the series, The Martians from the title are the humans who have colonized and terraformed the Red Planet over the course of several generations. While Robinson told their story at considerable length in his novels, The Martians fleshes out some of his more interesting characters and also adds depth to their world.

When it's at its best, this collection presents stand-alone stories of life, love, and work on our celestial neighbor, ranging from the tale of an expedition seeking to conquer Olympus Mons in "Green Mars" to a folksy story of friendship and baseball in "Arthur Sternbach Brings the Curveball to Mars." Unfortunately, some of the material here can be tough going for those unfamiliar with Robinson's Mars milieu. For instance, the ending piece, "Purple Mars," is apparently an autobiographical snippet about the day Robinson finished writing the final novel. That's great stuff for someone who has been following the entire Mars saga from beginning to end, but newcomers will probably not know what to make of it.

Still, there is enough material here to interest anyone on the lookout for some good Mars stories. Although Robinson has made his name by writing fat novels that span dozens of generations and characters, in The Martians he proves that he is also adept at shorter pieces. It's a fine if somewhat uneven collection that serves to round out the Mars universe while providing some excellent reading. --Craig E. Engler

With a Nebula and two Hugos to its credit, Robinson's monumental Mars trilogy (Red Mars, etc.) is one of the most honored series in the history of science fiction. Having finished the trilogy, however, and gone on to write yet another major novel, Antarctica, Robinson realized that he simply wasn't done with the red planet. There were important episodes in the lives of his major characters that hadn't made it into the novels. There were alternate possibilities that he still yearned to explore. There were pages of essays, vignettes, fables, poems, and fictional science and history, all demanding to be written. This collection represents Robinson's further thoughts on Mars. It encompasses a number of new short stories, including at least two set in alternate universes where events have taken place quite differently than in the novels. Among the best entries are "Coyote Makes Trouble," which concerns a plot to capture one of the planet's leading revolutionaries; "Arthur Sternbach Brings the Curveball to Mars," about the effect of Martian gravity on America's favorite pastime; and "Sexual Dimorphism," which involves a Martian scientist whose work strangely echoes his personal life. Also included is "Green Mars," a previously published novella about climbing Olympus Mons, the highest mountain in the solar systemAa wonderful story that, curiously, has no direct connection to Robinson's later novel of the same name. Some of the pieces here will be of interest only to those who have already read the trilogy, but the finest of the short fiction stands firmly on its own. As is the norm with Robinson's work, the stories are beautifully written, the characters are well developed and the author's passion for ecology manifests on every page. (Sept.)
Copyright 1999 Reed Business Information, Inc.