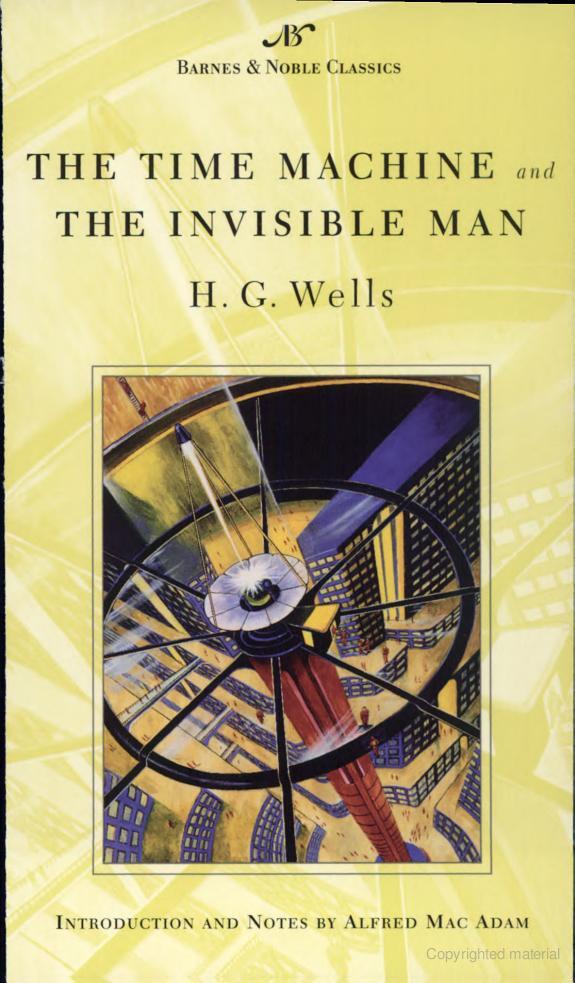 "The Time Machine", one of the most loved science fiction novels of all time, is H. G. Wells 1895 novel which crafts a vivid and haunting picture of an earth some 800,000 years into the future. The first novel about time travel, "The Time Machine" was written during a period of great technological advancement, the impacts of which were of serious concern to Wells. The author poses the question in the novel; will technology ever go too far? The future world of the 'Eloi', depicted in the novel, warns of the dangerous consequences of unchecked technological advancements. Also included in this edition is another of Wells' most popular works, "The Invisible Man". It is the story of a scientist, Griffen, who discovers a serum that will turn his entire body invisible. The initial excitement over the possibilities quickly dissipates when Griffen, who uses the formula on himself, is unable to turn himself visible again. "The Invisible Man" is a cautionary tale about tampering with the laws of the universe. It is the story of how one scientist's great discovery leads him into a state of madness. Readers will delight in these two cautionary tales about the potential dangers of scientific and technological progress.

The Time Machine (1895) and The Invisible Man (1897) are now more than a century old. Yet they endure as literary texts, radio plays, and movies, because they appeal directly to two of our deepest desires: immortality and omnipotence. The time machine would allow us to escape death and gain knowledge of the fate of the earth, while invisibility would enable us to go and come as we please, under the noses of friends and enemies. At the same time, both fictions show us the dangers of fulfilled wishes: The Time Traveller discovers the future of humanity is not bright but hideously dark, while the Invisible Man drowns in the madness brought about by his own experimentation.

Of course, what Herbert George Wells (1866–1946) wanted to express in these fantasies and what generations of readers have made of them are two radically different things. Erroneously labeled “science fiction,” and tricked out in their film versions with all kinds of fanciful devices with flashing lights and ominous buzzers Wells never mentions, they are really tales that enact the author’s theories and speculations about human society, human nature, and natural history in allegorical fashion. That is, the “science” in Wells’s fictions is nothing more than stage machinery. But, ironically, it is the machinery that has come to dominate our collective imagination.

There is nothing unique in this. Think of Gulliver’s Travels (whose long-forgotten original title is Travels into Several Remote Nations of the World), a book that Wells read as a boy and reread throughout his life. In 1726 Jonathan Swift (1667–1745) satirized English political parties, religious quarrels, theories of world government, and science, but his work was so grounded in eighteenth-century British culture that today’s readers need extensive preparation to fathom it. The story of Lemuel Gulliver’s visits to lands populated by giants or intelligent horses has, however, become a staple of children’s literature. The same applies to Robinson Crusoe (1719), by Daniel Defoe (1660–1731). Only scholars see the relationship between Crusoe’s shipwreck and Defoe’s ideas on the fate of the middle classes during the Restoration, when Charles II returned to England in 1660. Defoe’s message and all his political intentions have been lost, but his story endures as a wonderful demonstration of self-reliance. In the literature of the United States, we have the example of Herman Melville (1819–1891) and his Moby-Dick (1851): Most readers learn about the ambiguous struggle between good and evil embedded in the work long after they’ve read a novel about nineteenth-century whaling and the strange characters engaged in that dangerous work.

Much the same has taken place with Wells’s Time Machine and The Invisible Man. Wells cloaked his ideas about the future of society and the role of science in the world so well that readers simply do not see those issues and instead read his short novels as examples of a kind of fiction based on the simplest of propositions: “What if it were possible to travel through time by means of a machine?” or “What if it were possible to make oneself invisible?” In a world—one we share with Wells despite the fact that more than a hundred years separates the moment he published these two works from our own age—when scientists seem to make discoveries every day, it requires no great leap of imagination, no “willing suspension of disbelief,” to accept the basic premise of each text.

This is what differentiates Wells from Jules Verne (1828–1905), author of Voyage to the Center of the Earth (1864) and Around the World in Eighty Days (1873). Wells, in a 1934 preface to a collection of his early fictions comments on why they are not comparable to Verne’s writings:

These tales have been compared with the work of Jules Verne and there was a disposition on the part of literary journalists at one time to call me the English Jules Verne. As a matter of fact there is no literary resemblance whatever between the anticipatory inventions of the great Frenchman and these fantasies. His work dealt almost always with actual possibilities of invention and discovery, and he made some remarkable forecasts. . . . But these stories of mine . . . do not pretend to deal with possible things; they are exercises of the imagination in a quite different field. They belong to a class of writing which includes the Golden Ass of Apuleius, the True Histories of Lucian, Peter Schlemil, and the story of Frankenstein. . . . They are all fantasies; they do not aim to project a serious possibility; they aim indeed only at the same amount of conviction as one gets in a good gripping dream (_The Complete Science Fiction Treasury of H. G. Wells_).

Wells links himself to a tradition, but at the same time he misleads the reader. It is true, as he says in the same preface, that “The invention is nothing in itself,” by which he means that the applied science of Verne is of no interest in his kind of tale. It is also the reason why rediscoveries of Verne, especially films, are always set in the past: His projections became fact very quickly. By the same token, this explains why Wells’s inventions and their ramifications will always be modern.