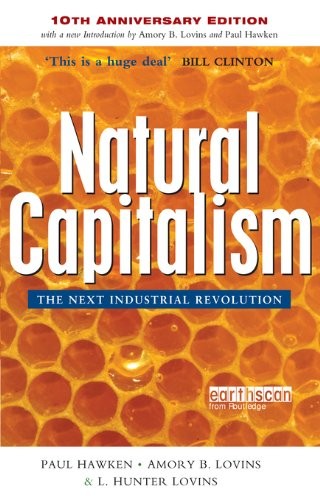 Natural Capitalism: The Next Industrial Revolution

On its first publication 10 years ago, Natural Capitalism rocked the world of business with its innovative new approach - an approach that fused ecological integrity with business acumen using the radical concept of natural capitalism.

This 10th-anniversary edition features a new Introduction by Amory B. Lovins and Paul Hawken which updates the story to include the successes of the last decade. It clearly sets out the path that we must now take to ensure the future prosperity of our civilisation and our planet.

"'There's a new book out I commend to you called Natural Capitalism... This is a huge deal' President Clinton; 'An analysis of how capitalism would work if the world's "natural capital" were properly valued, resulting in a drastic reduction in resource use by industrialised countries' The Financial Times; 'A powerful, visionary statement by three of the world's leading consultants on the greening of business' The Times Higher Education Supplement; 'If any book can be said to usher in a hopeful new age, it's this' Jonathon Porritt, Director, Forum for the Future; 'Leaves every reader with the hope that the old battle between business and the environment can reach a peaceful and constructive conclusion' Frances Cairncross, The Economist; 'The whole concept of natural capital manages to be both pragmatic and idealistic which, in my book, adds up to inspirational' Anita Roddick, The Body Shop International; 'This is smart, strategic thinking' The Independent; 'Includes a wealth of real examples... The authors provide a boldly practical way forward' The Times; 'Points the way to a world where the profit motive and social responsibility march hand in hand' John Quelch, Dean, London Business School"

Paul Hawken is an environmentalist, educator and best-selling author. He is known worldwide as on of the leading architects and proponents of corporate reform with respect to ecological practices. He is founder of several companies and author of numerous articles and scientific papers and of six books (published in over 50 countries, in 27 languages) including The Next Economy, Growing a Business and The Ecology of Commerce (voted in 1998 the number one college text on business and the environment by professors in 67 American business schools). He has served on the board of numerous organizations including Conservation International, Friends of the Earth and the National Audubon Society. He is the recipient of several honorary doctorates and the 1999 Green Cross Millennium Award for International Environmental Leadership from President Mikhail Gorbachev. Amory B Lovins and L Hunter Lovins are co-Chief Executive Officers of Rocky Mountain Institute which they co-founded in 182 in Colorado, USA. Physicist Amory Lovins is a MacArthur Fellow and the recipient of the Onassis Prize, the Heinz Award and six honorary doctorates, having been perhaps the youngest Oxford don in recent centuries. Hunter Lovins is a sociologist, political scientitst and barrister. The Lovinses have held visiting academic chairs and have been joint recipients of the Mitchell Prize, the Right Livelihood Award (the 'alternative Nobel Prize'), the Lindbergh Award and the Nissan Prize. Their pioneering technical, economic and policy work has been enormously influential in the energy, construction and car manufacturing industries. Consultants to scores of companies worldwide, they are co-authors of the best-selling Factor Four: Doubling Wealth, Halving Resource Use (with Ernst von Weizsacker) and of 25 previous books.