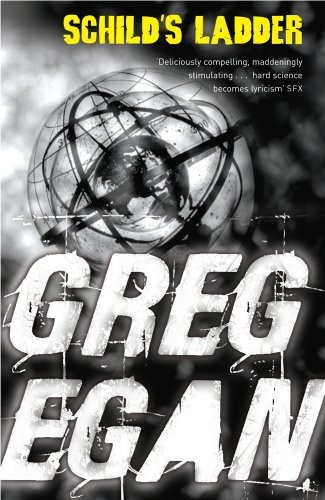 Cass has stumbled on something that might be an entirely different type of physics, and she's travelled three hundred and fifty light-years to Mimosa Station, a remote experimental facility, to test her theory. The novo-vacuum she creates is predicted to begin decaying the instant it's created, but even so short-lived a microscopic speck could shed new light on the origins of the universe. But instead of decaying, Cass's novo-vacuum is wildly successful and begins expanding, slowly but inexorably taking over the universe . . . SCHILD'S LADDER: a wild ride through the far future by one of the world's most respected and acclaimed writers.

In Schild's Ladder, humanity has transcended both death and Earth, and discovered its home world is nearly unique as a cradle of life. As it spreads throughout the galaxy, humanity enjoys an almost utopian existence--until a scientist accidentally creates an impenetrable, steadily expanding vacuum that devours star systems and threatens the entire universe with destruction.

Tchicaya is a Yielder, member of the faction that believes this "novo-vacuum" deserves study. The opposing Preservationists--among them Mariama, his first love--seek to save worlds and destroy the novo-vacuum. Discord heats to terrorist violence; then enmities and alliances are turned upside-down by a discovery that may mean the novo-vacuum is, instead, a new and very different universe--and one which may contain life. --Cynthia Ward

Australian Egan (Teranesia) writes some of the hardest SF around in terms both of difficulty and cutting-edge scientific content, as shown in his latest challenging novel, set some 20,000 years in the future. Though superhuman by our standards, Egan's characters often disembodied intelligences who prefer to live as programs in virtual reality or in still stranger, high-tech media are still capable of making mistakes. At the start, an experiment in quantum physics goes badly astray, creating another universe with physical laws that differ from our own. Its border expanding at half the speed of light, this new universe swallows planetary systems whole. Fortunately, humanity is so highly developed that entire populations can be quickly evacuated with little if any loss of life. Soon the scientific community divides into two groups, those who would destroy the new universe, and those who would study it. The debate becomes even more tense when evidence of life is found behind the rapidly expanding border. Characters invariably speak the language of quantum physics fluently, and the author makes little effort to bring their discussion down to the layman's level. Not until the end, when scientists begin to explore the new universe, does Egan make any real attempt to engage the reader's senses or emotions. The pleasures of this impressive novel, although considerable, are almost entirely intellectual.
Copyright 2002 Cahners Business Information, Inc.