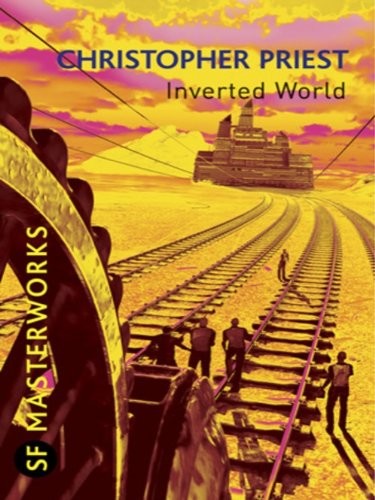 One of two or three of the most impressive pure-SFnovels produced in the UK since World War Two' ENCYCLOPAEDIA OF SCIENCE FICTION. A uniquely powerful novel of a society in decay. On a planet whose very nature is a mystery a massive decrepit city is pulled along a massive railway track, laying the line down before it as it progresses into the wilderness.

The society within toils under an oppressive regime, its structures always on the point of collapse, the lives of its individuals lived in misery. No one knows where they are going, why they are going or what they will find when they get there.

The ending of the novel provides one of the most profound twists in SF.

Christopher Priest's reissued novel Inverted World presents the reader with a city surrounded by high walls and a populace unaware that the entire polis sits upon tracks, pulled by a giant winch in order to stay ahead of a crushing, slowly moving gravity field...You feel the kind of surprise and exhilaration here that you do when a magician reveals (though they're not supposed to) the simple method behind an illusion." --Los Angeles Times

"... his well-crafted books play fun tricks on the reader. In this devilishly entertaining 1974 novel, Priest tells of a city called Earth that must perpetually move on rails to escape its hyperboloid planet's oppressive gravity." --Time Out New York

"A somber psychedelic journey through a landscape that seems a collaboration between Breugel the Elder and M.C. Escher, Priest's book is an engine of epiphany, and a formal marvel: a narrative in the exact shape of the conundrum it presents." -Jonathan Lethem

"This book shows us a community plunged into ignorance, trying to understand its place. You finish this novel appreciating our culture's efforts to protect its collective memories and also worried that everything we take for granted can easily be lost." --Los Angeles Times

"The most famous book from those days, Inverted World...upended existence, revealed a planet to be infinite, in a finite universe; between its poles, pressure warped every dimension of the body." —Guardian

"The author has created a unique and original world." -Publishers Weekly

"A marvellous thought experiment." —The Independent

"Inverted World will be remembered for many years, I would guess, as one of the few science fiction novels of the 1970s to come up with a new idea." -Foundation

"The Inverted World reads like a classic science fiction book--the physical concepts of the world in which it takes place are filled with a sense of wonder." -San Francisco Signal

"A science fiction mystery story about a world whose 'secret' is as incredible, but as acceptable, to its readers as it is to its characters --which if you think about it is one of the highest compliments a critic can pay to a novel. A well-structured, finely written, mature narrative that is very compelling and thoroughly entertaining. It is a 'must'."-Luna Monthly

"A marvelous thought experiment in which our familiar spherical world is replaced by a hyperboloid one. Rudy Rucker is equally known for his arithmetically generated science-fiction novels." -Independent on Sunday

"The story is among those seldom found, incredibly readable narratives that the reader aches to continue reading." -Jersey Journal

"One of the trickiest and most astonishing twist endings in modern SF." —Tribune (London)

Christopher Priest was born in Cheshire, England. He has published eleven novels, three short-story collections, and a number of other books, including critical works, biographies, novelizations, and children’s nonfiction. In 1996 Priest won the World Fantasy Award and the James Tait Black Memorial Prize for his novel The Prestige, which was adapted into a film by Christopher Nolan in 2006. His most recent novel, The Separation, won both the Arthur C. Clarke Award and the British Science Fiction Association Award. Priest and his wife, the writer Leigh Kennedy, live in Hastings, England, with their twin children.

John Clute was born in Toronto, Ontario in 1940, but has lived most of his life in England. He has won three Hugo Awards for his nonfiction. Recent work includes Appleseed, a novel, The Darkening Garden: A Short Lexicon of Horror, and *Canary Fever: Reviews.*