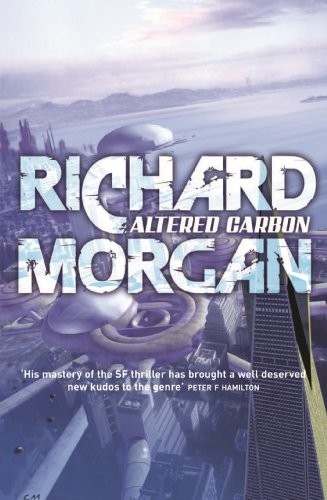 Four hundred years from now mankind is strung out across a region of interstellar space inherited from an ancient civilization discovered on Mars. The colonies are linked together by the occasional sublight colony ship voyages and hyperspatial data-casting. Human consciousness is digitally freighted between the stars and downloaded into bodies as a matter of course.For a first-time SF writer to be so surely in command of narrative and technology, so brilliant at world-building, so able to write such readable and enjoyable SF adventure, is simply extraordinary.

This fast-paced, densely textured, impressive first novel is an intriguing hybrid of William Gibson's Neuromancer and Norman Spinrad's Deus X. In the 25th century, it's difficult to die a final death. Humans are issued a cortical stack, implanted into their bodies, into which consciousness is "digitized" and from which-unless the stack is hopelessly damaged-their consciousness can be downloaded ("resleeved") with its memory intact, into a new body. While the Vatican is trying to make resleeving (at least of Catholics) illegal, centuries-old aristocrat Laurens Bancroft brings Takeshi Kovacs (an Envoy, a specially trained soldier used to being resleeved and trained to soak up clues from new environments) to Earth, where Kovacs is resleeved into a cop's body to investigate Bancroft's first mysterious, stack-damaging death. To solve the case, Kovacs must destroy his former Envoy enemies; outwit Bancroft's seductive, wily wife; dabble in United Nations politics; trust an AI that projects itself in the form of Jimi Hendrix; and deal with his growing physical and emotional attachment to Kristin Ortega, the police lieutenant who used to love the body he's been given. Kovacs rockets from the seediest hellholes on Earth, through virtual reality torture, into several gory firefights, and on to some exotic sexual escapades. Morgan's 25th-century Earth is convincing, while the questions he poses about how much Self is tied to body chemistry and how the rich believe themselves above the law are especially timely.
Copyright 2003 Reed Business Information, Inc.

In a society in which death has been rendered practically obsolete, suicide and murder take on different significances. After a particularly brutal offing, former UN envoy Takeshi Kovacs finds himself "resleeved"--that is, his consciousness has been put in a new body--and hired as a private investigator by Laurens Bancroft, one of twenty-fifth-century society's old rich in Bay City (formerly San Francisco). Bancroft claims he was murdered, but the police say it was a suicide. After Kovacs gets hit at his hotel within hours of being resleeved, he sees the possibility that Bancroft was, in fact, murdered, and that someone wants to keep it very hush-hush. As he investigates, he uncovers a far-reaching conspiracy with ties to the most unsavory characters in his generally unsavory military and criminal past. This far-future hard-boiled detective story is a lovely virtual-reality romp distinguished by a conspiracy whose strands have the potential to generate several successful sequels, which is just what its publicity promises. Regina Schroeder
Copyright © American Library Association. All rights reserved