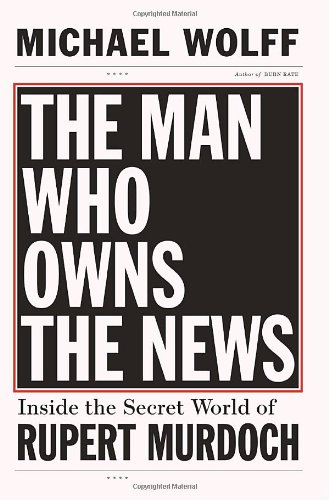 The Man Who Owns the News: Inside the Secret World of Rupert Murdoch

If Rupert Murdoch isn’t making headlines, he’s busy buying the media outlets that generate the headlines. His News Corp. holdings--from the New York Post, Fox News, and most recently The Wall Street Journal, to name just a few--are vast, and his power is unrivaled. So what makes a man like this tick? Michael Wolff gives us the definitive answer in The Man Who Owns the News.

With unprecedented access to Rupert Murdoch himself, and his associates and family, Wolff chronicles the astonishing growth of Murdoch's $70 billion media kingdom. In intimate detail, he probes the Murdoch family dynasty, from the battles that have threatened to destroy it to the reconciliations that seem to only make it stronger. Drawing upon hundreds of hours of interviews, he offers accounts of the Dow Jones takeover as well as plays for Yahoo! and Newsday as they’ve never been revealed before.

Written in the irresistible stye that only an award-winning columnist for Vanity Fair can deliver, The Man Who Owns the News offers an exclusive glimpse into a man who wields extraordinary power and influence in the media on a worldwide scale--and whose family is being groomed to carry his legacy into the future.

An Interview with Michael Wolff on Rupert Murdoch

Q: Over the years, Rupert Murdoch has built a personal fortune worth $9 billion and a global media empire that includes more than 100 newspapers, the Fox movie studio and television networks, satellite TV systems in Europe and Asia, the book publisher Harper Collins, and MySpace. Despite that, he has continued to be regarded as an outsider, an interloper at the establishment ball. Is that perception of him accurate, or is it an image that he has carefully cultivated to serve his own goals?

Michael Wolff: I think both are absolutely true. Rupert Murdoch came into this business as an outsider and he continues to see himself as such, no matter that he owns everything, controls everything, and is the central person of our time. He continues to see himself as an outsider and it gives him enormous happiness, joy, and a reason to get up in the morning to stick it to, I guess, the rest of us.

Q: In 2007, Murdoch mounted a successful $5 billion bid to acquire Dow Jones, a drama that occupies center stage in your narrative. Why did he pursue Dow Jones and its crown jewel, The Wall Street Journal? Was it an expression of the opportunism for which he is legendary, a bid for respectability, or both?

MW: It was a bid for a newspaper. Murdoch is a newspaper man--a man who is consumed by newspapers. His reason for being is newspapers. The Wall Street Journal is arguably second only to the New York Times, the best newspaper in the world--and Murdoch had set his sights on it long before he had any hope of getting it. That’s one of the interesting things about Murdoch: The fact that he has no hope of realizing his dreams is never an impediment to him. With Dow Jones, he was just there and just wouldn’t go away, and, finally, as in all things, it comes to him.

Q: Murdoch has said that he is “proud” of the enemies he has made. Why does he instill such strong feelings of fear, contempt, and even outright loathing in so many people? What is it about him that gets under people’s skin?

MW: The truth is that he doesn’t go along. “To get along, you go along” is not a Murdochian turn of phrase or turn of mind. He is a man who, because he comes out of the newspaper business, has fought newspaper wars and newspaper-like wars wherever he’s gone. There’s always an enemy, and an enemy gives Rupert a reason for being, it gives structure to the fight, it gets him up in the morning--and it means that at the end of the day, there’s always a winner and there’s always a loser. There’s no middle ground, there’s no ambivalence with Rupert Murdoch.

Q: The title of your book, The Man Who Owns the News, calls to mind outsized media moguls such as Henry Luce, William Randolph Hearst, and William Paley, men who relished ownership of their media properties and used them not just to build their fortunes but also to influence politics and society. Do you see Murdoch as a continuation of that historical tradition? And, if so, is he the “Last True Mogul,” an anachronistic throw-back in today’s world?

MW: The point is that Rupert Murdoch is so much bigger than any of these men. The world has never seen someone like Murdoch. He has held power literally longer than any politician, any businessman, any celebrity in our day and age. For thirty years he has been at the top of his game, more influential than anyone else across that period of time. So you have to see Rupert as absolutely sui generis, absolutely unique. We will, I doubt, ever see the likes of Rupert Murdoch again.

Q: In reporting your book, you gained an unprecedented level of access to Murdoch himself, as well as to his family members and most trusted lieutenants. How were you able to gain such access? And did Murdoch try to impose any conditions on your reporting?

MW: Absolutely no conditions were unimposed. The answer to how I gained such access remains entirely unclear to me, and I think, certainly for the first couple of months as I sat interviewing Rupert, that it was entirely unclear to him. I think he looked at me, kept looking at me, and kept asking himself, “What is this guy doing here?” This is partly a function of the unique culture of News Corp. I think Rupert’s people thought that Rupert wanted me to be there, so I kind of found my way in. But I must say that this was cooperation beyond my wildest dreams. They never said no to anything. Even when I went to Australia and spent the day with Rupert’s 99-year old mother, he called ahead and said, “Oh, tell him anything,” and she did. It has been one of the seminal experiences of my long journalistic life.

By no means has Michael Wolff given the world the definitive biography of Rupert Murdoch. Several critics, especially those in the United Kingdom, felt that he had not even written a factually adequate one, leaving out major episodes and making several major errors. Others wrote that Wolff has written an interesting book but that it never truly penetrates the "secret world" of its subtitle. But like the tabloid newspapers upon which Murdoch built his empire, The Man Who Owns the News offers so many titillating details that reviewers found it difficult to put down. Add in the fact that its foundation was an encounter between two of the most enigmatic and controversial characters in today's media elite, and it may not even matter what's true and what's not.
Copyright 2009 Bookmarks Publishing LLC